Resourcefulness Through Reclamation in Benzie County

Resourcefulness Through Reclamation in Benzie County 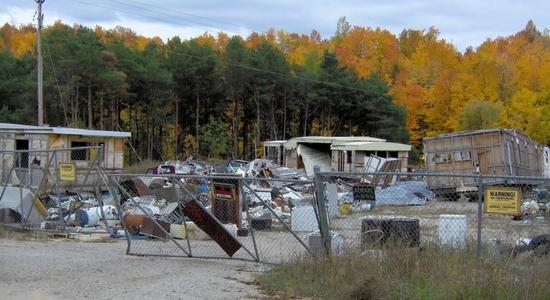 Resourcefulness Through Reclamation and Recycling:
How Benzie County Has Cut Demo and Dumping Costs

With an operating budget under $100,000, Benzie County Land Bank Authority’s pool of funding for demolition and site cleanup is a far cry from some of its larger land bank counterparts in the state. However, communities throughout Benzie County still struggle with blighted, vacant properties that need to be demolished and cleaned up prior to being put back to productive use. So, BCLBA works to drive down its demolition costs where possible to enable them to have an impact on key sites throughout the county. Through the years, BCLBA has used deconstruction and recycling partnerships to minimize their on-site demolition costs and reduce the amount of demolition waste going to the landfill.

The first property BCLBA took ownership of was a large, blighted junk yard strewn with tens of thousands of tires, dilapidated accessory structures, and waste. Using its resourcefulness, BCLBA worked with a contractor to recycle 77% of the waste removed from the site and use the value of the scrapped steel to offset the land bank’s other demolition costs for the site. Additionally, BCLBA leveraged grant funding from the Michigan Department of Natural Resources to remove and recycle 30,000 tires from the site.

BCLBA continued its cost-reducing recycling and reclamation practices in two other demolition sites on Main Street in the village of Honor. Prior to the demolition of the infamous “Question Mark” building, featured in another MALB project spotlight, BCLBA allowed a local salvager to reclaim lumber and architectural artifacts from the building for a month prior to the demolition. In addition to preserving some of the historic elements from the property, the salvage work also reduced the amount of hardscape that needed to be transported and dumped into a landfill, thereby reducing total demolition costs.

A similar strategy was also used on a land bank site one block down from the “Question Mark” building. This site housed a dilapidated building, large garage, and other auto-related waste. BCLBA partnered with the County’s recycling program to coordinate the pickup and removal of around 500 tires and partnered with the Michigan Department of Environmental Quality to remove the fuel tanks and most the environmental contamination. The land bank then worked with another local salvager to remove the garage, reclaiming most of the building’s materials. These partnerships ultimately reduced the total project size for the demolition contractor, leaving only one building for demolition.

While the need for demolition and blight abatement throughout Benzie County will likely continue to outpace the land bank authority’s available funding, BCLBA’s work has proved that smaller land banks can have a big impact with collaboration, creativity, and resourcefulness.