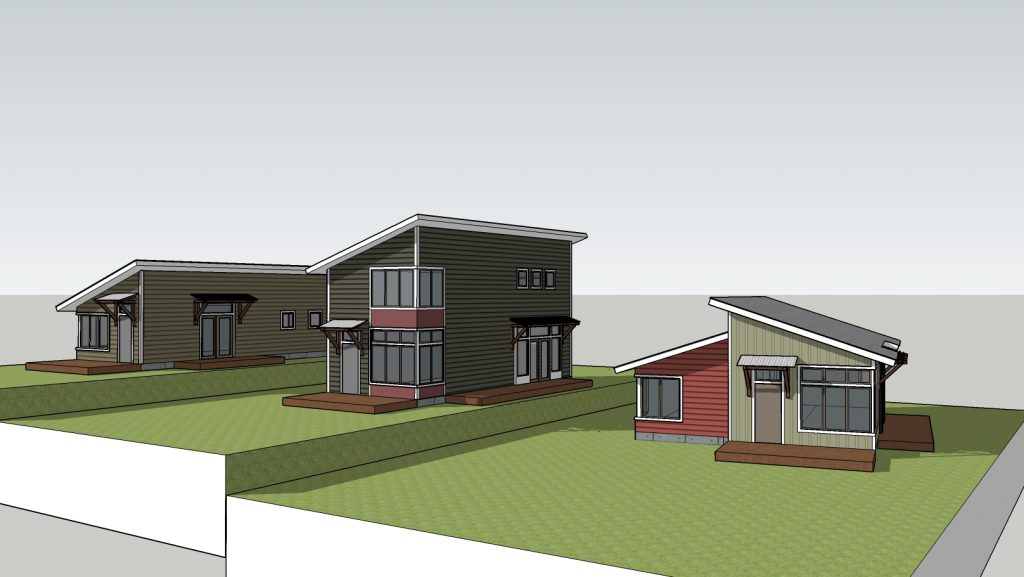 The Kalamazoo County Land Bank is planning to raise $2.5 million for eight 600-1,000-square-foot, 1-2 bedroom homes on Foresman Avenue off East Michigan Avenue. After hosting multiple public open houses, draft designs are being put together in anticipation of a fundraising campaign and construction to begin in fall 2018.

Kalamazoo’s Eastside neighborhood has been economically challenged for years. Several condemned or blighted homes at the site of the planned development were demolished in the last decade. One was associated with meth activity.

“It was getting to be a bit of a crime issue,” said Pat Taylor, Eastside Neighborhood Association executive director. “Residents were always concerned about the housing stock in the neighborhood, and still are for the most part. Some attention is finally being paid on the east side, and housing is being replaced after so many homes being taken down.”

Executive Director Kelly Clarke said the Land Bank is trying to focus on sustainability through restorative development. Reusing previously contaminated, blighted and underutilized property instead of demolishing structures is more in line with the original intent behind land banks, she said.

“We’ve heard people say, ‘You guys do transformative projects, you need to keep doing that,'” Clarke said. “We’ve heard from the community, we feel like it has an impact.”

Land Banks are a Michigan invention, created in 2004 to respond to a tax-foreclosure cycle in Genesee County. They are public or community-owned entities created to acquire, manage, maintain, and repurpose properties, but more grant funds are available for demolition projects.

“There’s a quality of life piece — there’s the influence on people and how they are able to experience and enjoy their daily lives — and (there’s also) the economic power of taking depleted, damaged and sometimes destroyed spaces and restoring them,” Clarke said.

Approximately 80 people participated in meetings with the Eastside Neighborhood Association and charettes. Feedback gathered showed desire for mixed-income small homes, shared garden space, native plants and a linear art park — all aspects which will be reflected in the project’s final plans.

“We heard very clearly from the community (that) they wanted a range of incomes,” Clarke said. “They didn’t want an over-concentration of affordable units but they also didn’t want to feel like people with higher incomes who aren’t representative of the neighborhood demographic were the only ones who could purchase here.” Mixed-income communities are more likely to hold steady property values, Clarke said. Low-income neighborhoods are more vulnerable during periods of decline, while a mix of incomes provides a “buffer” for real estate values in economically challenging times.

Inform Architects and OCBA Inc. are partnering with the Land Bank and Eastside Neighborhood Association to design the project. A conceptual draft is ready, but permits haven’t been obtained from the city of Kalamazoo yet. Stella Carruso, an Eastside native, is providing consulting assistance to the project from Seattle, where she specializes in small home design.

Small homes are becoming more popular among singles, seniors and millennials, Clarke said, in part due to their low purchase price and utility cost. Kalamazoo’s first “tiny home” was built on Charles Avenue in the Eastside neighborhood, but Taylor said residents felt more tiny homes wouldn’t fit the character of the area.

The site is adjacent to a community garden and tool resource shed, built with the help of volunteers in 2012. It’s also been an adopt-a-lot site partnership with Trybal Revival Gardens, Eastside Neighborhood Association and the Land Bank.

Hundreds of volunteers have spent time improving the site or working in the gardens. Taylor said residents have expressed interest in building a pocket park closer to residences. Maintaining green space is also valued in the community, she said.

The Land Bank has begun seeking funders for the project. Clarke said she hopes to have $2.5 million raised in time for construction to begin in 2018.

Ideally, the first home would be finished before the end of next year, with more available in 2019.

It can be expensive to restore a property, costing more than the market price once finished, so it’s difficult to pair with the private sector. Partnerships are being sought with various community groups. Taylor said she appreciates the Land Bank’s vision.

“It brings another bright spot into our neighborhood,” she said.