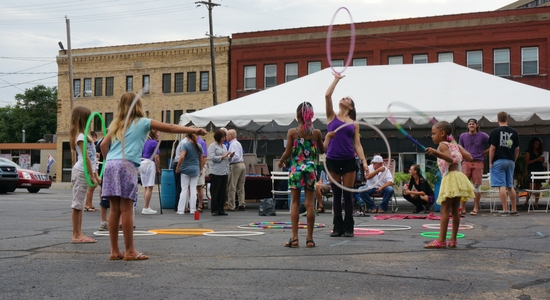 Transforming Properties and Perceptions: The Story of Art Hop and Washington Square

Unlike many land banks in the country focusing strictly on residential properties, the Kalamazoo County Land Bank Authority has taken on commercial property revitalization since its founding in 2009, often using creative paths in revitalizing commercial parcels, as demonstrated by its work in Washington Square. Before businesses would move in to the area, the land bank had to convince owners that the perception of crime in and around Washington Square would not keep potential customers away. The land bank directly confronted concerns about crime and safety by hosting various arts and culture events in the existing structures. They expanded an event called “Art Hop” to the Washington Square area to bring people to the commercial strip through a visible, fun, approachable event that reactivated vacant storefronts and provided residents an opportunity to reengage in the area in an effort to change perceptions of the neighborhood. The land bank invited 13 local artists to the first Art Hop, and included multicultural artists at subsequent events to engage and uplift the diverse backgrounds of the area’s residents. Over 300 people attended the first Art Hop in Washington Square. Art Hop has continued in Washington Square, and business owners cite the event as a key factor in moving to the area, highlighting the excitement that the event generated and the safety it has created because of the development of “eyes on the street.” Due to the efforts of the land bank and community partners, four new businesses have located in Washington Square in the last three years, with a fifth tenant soon to come. Click here for more details on the Kalamazoo County Land Bank.